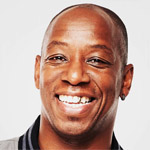 WFC The Venue are proud to announce a Sporting Dinner with Ian Wright! This is sure to be a great night at Banks’s Stadium and certainly one not to miss! As well as Ian Wright, we also have his compare and comedian joining us here too.

Wright enjoyed success with London clubs Crystal Palace and Arsenal, spending six years with the former and seven years with the latter. With Arsenal he has lifted the Premier League title, both major domestic trophies, and the European Cup Winners Cup. He played 581 league games, scoring 387 goals for seven clubs in Scotland and England, earning 33 caps for the English national team.

After retiring from the game he has been active in the media, usually in football-related TV and radio shows.