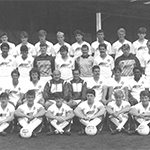 A night not to be missed! Players returning include:

This was   the  Centenary  year where we played Man United  a team including players of the stature of  Bryan Robson and Paul McGrath and others, Walsall also earned promotion through the old Division Three play-offs in 1988, beating Bristol City in a replayed final at Fellows Park, 13,007 where there to see it.

David Kelly scoring a memorable hat trick  and Phil Hawker the other in a 4-1 victory. A team full of characters and exceptional players all returning alongside there influential Manager Tommy Coakley

This is to include Pie and chips and a Pint, all 88 players to sit with Fans when the meal is served then to take the stage for an Interactive Q+A