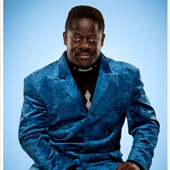 Despite the fact that Harry has entertained from a very early age, including a brief spell on the West End stage with the National Youth Theatre, Harry’s singing career really took off after appearing on Granada Televisions “stars in their eyes” as Luther Vandross, the producers were so impressed that they asked him to return for two more special shows!

Although Harry’s main tribute is to soul legend Luther Vandross, he will be performing some of the most iconic Motown hits from artists such as Ben E King, The Temptations and The Drifters to name but a few.