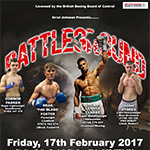 Hot Halesowen prospect, Lennox Clarke, is in action as he looks to secure a title shot in 2017. The 25 year-old is unbeaten in 14 professional contests and has set his sights on a showdown with English Super Middleweight Champion, Jahmaine Smyle. Clarke was ringside in November when Smyle retained his belt with a split decision victory over Leon McKenzie.

After being avoided at Midlands level, ‘Dangerous’ is ready to prove himself at national level and will enjoy an eight round warm-up to blow off the Christmas cobwebs.

Talented Lichfield flyweight, Brad Foster, is also in action. ‘The Blade’ has recorded five straight professional victories since making the switch from kick boxing just 12 months ago. The 19 year-old recently signed a three-year promotional contract with Frank Warren and, after securing nine world titles in kickboxing, is looking to reach world level as a boxer. Foster will enjoy a six round tune-up as Warren plots the youngster’s next move.