A Sporting Dinner with Paul Mcgrath 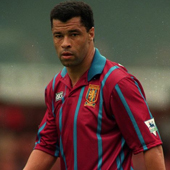 Widely regarded as Aston Villa’s greatest-ever player, former defender Paul McGrath visits the Banks’s Stadium in May for the first of our fun-filled sporting dinners.

The Irish centre-back achieved legendary status at Villa Park and was nicknamed ‘God’ by the Club’s supporters.

As always, our popular sporting dinners include a comedian, stand-up bingo, a silent auction, raffle and a delicious three-course meal.